Hyde Park has long been famous as a place for Londoners to gather and enjoy themselves. The park was London’s playground back in the 18th century, just as it is today. People would promenade in a circle of trees in the north of the park known as ‘The Ring’ taking a leisurely walk or riding their horses. It was the fashionable place to be seen, in your best outfit with your friends. 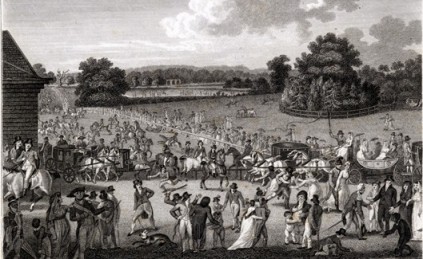 Hyde Park was the place to be and be seen for Georgian Londoners. This view from 1804 shows the park on a Sunday.

Another attraction for the Georgian Londoner were the Park’s refreshment rooms. Samuel Pepys spoke of a lodge in the middle of the park that served cheesecakes and other delicacies. It was known by lots of different names including the Cheesecake House, the Cake House, the Mince-Pie House, the Keeper’s Lodge and Price’s Lodge (Gervase Price being the chief keeper in its early years).

The Cheesecake House is thought to have been a timber and plaster building near the Serpentine, that was accessed over the water via a small footbridge. An investigation by the Royal Commission on Historical Monuments in 1993 found no trace of the building but we know it existed from many drawings and paintings.

There are also several references to the house in literature, including this extract from Howard’s English Monsieur (1674):

“Nay tis no London female; she’s a thing that never saw a cheesecake, a tart, or a syllabub at the Lodge in Hyde Park”

The Cheesecake House was such a feature of London life, you wouldn’t be considered a Londoner unless you’d enjoyed the refreshments on sale at this Hyde Park lodge.

So that’s a bit about the building and its business. But what did the famous cheesecakes taste like?

2 thoughts on “The story of Hyde Park cheesecake house”