Last weekend, the Carshalton Lavender fields opened up to the public for their annual harvest fair. Visitors were free to explore three acres of fragrant purple flowers – an unlikely floral haven in the middle of a London borough.

The lavender field is at the centre of a community-led project with an impressive vision: to revive the lavender industry in the south-west reaches of Greater London.

Up until the First World War, Mitcham, Sutton and Waddon were host to acre upon acre of blue lavender: a flourishing industry that had grown up from the beginning of the 18th century. The flowers were destined for a variety of uses. Some were cut, dried and sold on the streets of London, while others were sent to the distilleries for the fragrant oil to be extracted.

A lavender seller at Temple Bar in the early 19th century

In the Victorian era, the Mitcham area became important supplier for cosmetic companies such as Yardley’s. But the flower was also historically prized for its medicinal properties.

Today’s recipe from The Cookbook of Unknown Ladies is for ‘compound spirit lavender’, a powerful infusion of fresh lavender flowers, brandy and spices. Our unknown ladies don’t indicate what the concoction was to be used for, but lavender was commonly thought to aid recovery from fainting and dizziness. Some even believed that it could help to cure infertility. 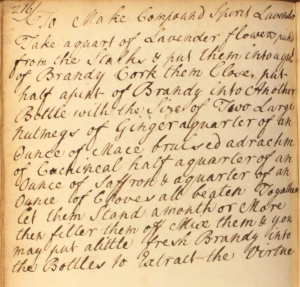 As with all the medicinal recipes from The Cookbook of Unknown Ladies we’d advise you not to try this at home! But if you’d like to experience a bit of London’s lavender heritage, do take a trip over to Sutton.  Carshalton Lavender will be closed until next year’s harvest, but commercial field Mayfield Lavender will be welcoming visitors until late September…

There’s also a great article on the history of local lavender production on the Sutton Council website. Enjoy!