It is with great pleasure that we welcome back Maya Pieris as today’s guest author. Maya has a passion for food history and, as a founding member of Bridport’s History Girls group, she has plenty of experience in recreating historic recipes. In her last article, Maya explored the history of the British picnic, from working lunches in the fields to formal outdoor dining. Today she serves up another appetising slice of food history as she shares an international story of clotted cream…

I was taken to see an old gentleman of eighty who has eaten [clotted cream] all his life, four times a day, and he seemed none the worse

– from Truffle Hunt by Sacheverell Sitwell (1953)

Cream first, or jam? It’s an issue almost as divisive as that which surrounds the pronunciation of “scone” (skəʊn or skɒn): a question which provokes earnest and passionate opinions! I feel that logically (and culinarily) that the order should be scone, then cream and then jam on top. Not only is it visually more appealing this way, but the cream also acts like butter and a kind of ‘glue’ for the jam. No doubt many of you who read this will be of the opposite point of view!

As well as being the focus of this on-running gastronomic debate, clotted cream also has a fascinating history and a wide cultural reach. In the cuisines of countries such as Turkey, Iran and Afghanistan, local people make a rich clotted cream called kaymak from water buffalo milk. Cows milk and cream are also used to produce a version which is a little less rich. Production in this area of the world dates back to the 16th century at least:  in 1573 a decree was issued to women of the Ottoman Empire, forbidding them to enter shops selling kaymak as these establishments had become known as trysting places!

British clotted cream also has a long and intriguing history.  It has been suggested by food writers such as Alan Davidson that the arrival of Phoenician traders to Cornwall around 2000 years ago may have introduced the tradition. The cream’s association with the dairy farming region of the West Country is also well-established, with recipes for “clouted” cream in local cookbook collections dating back several centuries. But clotted cream was also very popular in other counties. Lady Elinor Fettiplace, Elizabethan mistress of an Oxfordshire manor house, recorded her method for clotting cream in her household book. She made it from the top of the morning’s milk, alternately cooled, heated, “dripped” with fresh cream, heated again and then left to stand overnight. Cinnamon and mace were sometimes used to flavour it. 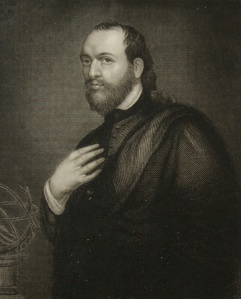 Another fan of clotted cream was Sir Kenelm Digby (1603–1665), a 17th century resident of Covent Garden. Sir Kenelm’s passion for science and philosophy saw him commit much of his life to the pursuit of alchemy. But he was also a keen collector of more prosaic recipes. A posthumous publication of his cookery writings included a couple of recipes for clotted cream. Although the recipes differ in detail and length (one comprises two pages of instructions while the other extends only to 7 lines), both dishes are decidedly sweet, being strewn with sugar before they are served:

Take two Gallons more or less of new milk, set it upon a clear fire; when it is ready to boil, put in a quart of sweet cream, and take off the fire, and strain it through a hair sieve into earthen pans; let it stand two days and two nights; then take it off with a skimmer; strew sugar on the cream, and serve it to the Table.

Over the centuries, clotted cream has gained a well-deserved place in the nation’s culinary pantheon. Many of us may not follow in the footsteps of Sir Kenelm Digby or Lady Elinor Fettiplace by preparing the cream ourselves, but no matter… this dairy delight seems as popular as ever, whether enjoyed in a West Country cafe or at a London hotel for afternoon tea.

To find out more about the activities of The History Girls check out their Twitter feed, or browse Maya’s range of historically-inspired pickles by visiting her Four Seasons Preserves online shop!

One thought on “A concise history of clotted cream”