With Tuesday’s Georgian pancake recipes, our Cookbook of Unknown Ladies project draws to a close…

We have had a wonderful time discovering the dishes in this extraordinary manuscript. Working through the Cookbook’s varied recipes has brought us closer to understanding the way our ancestors lived and worked. From lavish royal banquets to the harsh workhouse diet, from the noisy cries of London’s itinerant street traders to the semi-rural idyll of its market gardens, our Unknown Ladies’ recipes inspired us to delve deeper into our city’s Georgian past. What’s more, we’ve been able to to enjoy some tasty eighteenth and nineteenth-century treats along the way.

Thank you to everyone who took the time to comment on our recipes and articles throughout the project, and to those of you who bravely gave the recipes a go at home. It has been a privilege to share this adventure with you.

Special thanks goes to Annie Gray who provided invaluable advice and support throughout the project, and even tried out a rather gungy and gooey cow heel recipe on our behalf! We are also indebted to Maya Pieris, Alycia Smith-Howard and Janet Ing Freeman, all of whom contributed insightful and delightful articles on British food history.

And finally, we are hugely grateful to our merry band of volunteers, the Cooking Up History Group.

We hope you have enjoyed the project as much as we have.  If you have any questions about the Cookbook of Unknown Ladies or this project, get in touch with the team at Westminster City Archives: archives@westminster.gov.uk.

This recipe for gnocchi di latte is the latest of all the recipes recorded in our Cookbook of Unknown Ladies. Properly speaking, it isn’t an integral part of the book: it was recorded on two separate sheets, which were then pasted onto the book’s endpapers. The handwriting and spellings are more modern in appearance than most examples in the book and the recipe itself, with its precise measurements and timings and helpful hints and tips, reads as if it could have been lifted straight out of a contemporary cookery magazine.

Our guess is that this recipe dates from the last couple of decades of the 19th century. We wonder whether its author was a descendant of the Cookbook’s Georgian contributors…

Take a quart of new milk, the yolks of 8 eggs, ½ lb of sifted loaf sugar, 2 tablespoonsful of corn flour. Grate some rind of a lemon into a bason and mix well together the above ingredients (be sure the yolks of the eggs are well beaten). Put into a saucepan to boil for ten minutes, keeping well stirred all the time to prevent curdling. When done, pour out on a flat board well floured. Let it stay till cold. Then, cut into squares or diamond shapes to be laid on a flat dish in layers, each layer to be sprinkled with Parmesan cheese, fresh butter & a little ground cinnamon. Bake a delicate brown colour in the oven.

We found it best to make the night before and cut the next day.

A cold cream is a cooling ointment that is applied to the skin as a moisturising cosmetic and cleanser. In the 1920s and 1930s, celebrity endorsements of brands such as Pond’s and Elizabeth Arden led to a huge uptake in commercially-produced emollients, with the verb ‘to cold-cream’ entering common parlance around this time. Cosmetic manufacturers began to market their creams with a liberal sprinkling of glamour: as a Hollywood actress’s beauty secret, or as the preferred cosmetic of European royalty.

Adverts for cold creams were so prevalent in the first half of the 20th century, one would be forgiven for thinking that they were a relatively recent invention. Far from it! Cold creams had already been a staple of women’s cosmetic drawers for centuries, long before mass-production came on the scene.

The ladies who wrote our Georgian Cookbook recorded this recipe for home-made cold cream, which they attribute to an ‘Aunt Preston’. With ingredients including trotter oil and spermaceti, a wax derived from the head cavity of the sperm whale, it’s a far cry from the glamorous image projected by early 20th century cold cream brands. On the other hand, its high fat content should have made it an effective moisturiser, and an effective defence against the harsh winter weather: 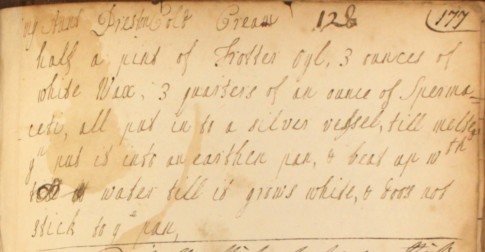 “My Aunt Prestons Cold Cream”, a Georgian recipe from our Cookbook of Unknown Ladies

Half a pint of trotter oyl, 3 ounces of white wax, 3 quarters of an ounce of spermaceti, all put in to a silver vessel till melted. Yn put into an earthen pan & beat up wth water till it grows white & doos not stick to ye pan.

Make the most of the chilly February weather with this indulgent Georgian-era pudding. Toasted bread, raisins, bone marrow and creamy ginger-spiced custard are layered up in a dish, topped with a puff pastry lid and baked in the oven for the ultimate in comfort food. Sounds familiar? Substitute the marrow for butter, and you’d have something along the lines of a classic British bread and butter pudding:

This 18th century baked marrow pudding bears more than a passing resemblance to bread and butter pudding, a British classic

Take a pint of cream & boyle in it 2 rase of ginger, a little sugar & let it cool. Put to it 6 eggs, 2 whites, half a spoonfulls of flower. Then have some sippits of bread toasted & some raisons, some lumps of marrow, & butter ye bottom of your dish very well & lay a lairer of sippits & then a layer of raisins & then 6 spoonsfulls of cream, than a layer of marrow, then raisins & sippits again & cream, & so fill yr dish. Put a lid of puff paste at top. 3 qrs of an hour bakes it.

Winter is Seville orange season.  These brightly-coloured, bitter fruits make a brief annual appearance in British groceries for a mere three months from December. By the end of February, the gardens and streets of Seville with fallen fruit, and the supply to British supermarkets will have all but dried up.

If you’re partial to marmalade, now’s the time buy your Seville oranges and bring out the the preserving pan. Those of you who do make your own marmalade are taking part in a centuries-old tradition. Here is an 18th century recipe for ‘Marmalade of Oranges’ from our Cookbook of Unknown Ladies: 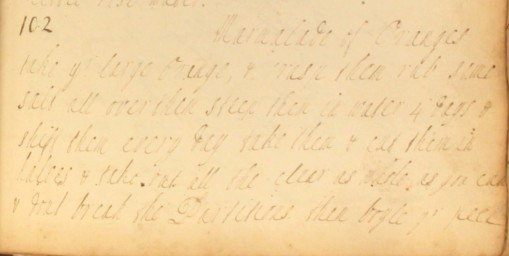 Take yr large orange & rasp them. Rub some salt all over them. Steep them in water 4 days & shift them every day. Take them & cut them in halves & take out all the clear as whole as you can & dont break the partitions. Then boyle yr peel till it is so soft as to run a straw through it. Take it out of the water & take out all the strings, but take out as little of the white as possible. Pound the peel very small. Take their weight of loaf sugar & dip it in boyling water & make it in a clear sirrop with whites of eggs, & boyle yr pounded peel & clear lumps in it very well. Then lay it up when cold for use. Jelly is made the same way, only leave out the peel & use the clear lumps instead.

How better to mark the birthday of Scotland’s national poet, Robert Burns, than with a Good Scotch Haggis! Burns famously penned an Address to a Haggis, an ode to the ‘great chieftain o’ the pudding race’, which first appeared in print in the Caledonian Mercury of 20 December 1786.

This recipe was copied into our Georgian Cookbook from The Cook’s Oracle by Dr William Kitchener, who in turn had taken it from Mrs Maciver, a cookery school teacher in late 18th century Edinburgh. Susannah Maciver was practising her art of cookery around the time when Burns was immortalising the hearty haggis in poetry.

A Scottish recipe for haggis, borrowed from a Mrs Maciver of Edinburgh for Dr Kitchiner’s Cook’s Oracle

Make the haggis bag perfectly clean. Parboil the draught. Boil the liver very well so as it will grate. Dry the meal before the fire. Mince the draught and a pretty large piece of beef very small. Grate about half of the liver. Mince plenty of the suet and some onions small. Mix all these well together with a handful or two of the dried meal. Spread them on the table and season them with salt and mixed spices. Take any of the scraps of beef and some of the water that boiled the draught and make about a choppin (sic.) a quart of good stock of it. Then put all the haggis meat into the bag and that broth in it. Sew up the bag, but be sure to put out all the wind before you sew it quite close. If you think the bag is thin, you may put it in a cloth. A large one will take two hours boiling. From Mrs Maciver of Edinburgh.

The title of this dish is a little misleading. It might have you expecting a fine seafood dish, but rather than scallops these are in fact ‘Scotch Collops’: thinly sliced veal in a rich gravy.

The term ‘collop’ is thought to derive from the French escalope and essentially means the same thing: a boneless slice of meat, which could be fried, broiled or stewed. This Scottish variation offers a rich winter treat, but wouldn’t be cheap to make today: the recipe calls for both oysters and truffles.

There’s another ingredient which is rarely seen today: the recipe instructs that, should a heifer calf be used for the veal meat, then the udder should be cut up finely ‘like coxcombs’ and fried up as a garnish for the dish!

Take a leg of veal. Cut of as thin as possible, ye round way, as much scollops as will fit yr dish, & beat them with [a] rowling pin. Strowe them all over with flower, then put an ounce and half of butter in ye pan & when it is hot, lay in the meat & lay ye same quantity of butter over it. Then cover them with a plate & let them stew till all ye liquor is consumed & ye are a fine light brown. Then put a pint & half of good brown greavy & half a pint of white wine, some thyme & parsley, two anchovys, two onions shred, half a nuttmeg grated, half an hundred of large oysters, some lemon peel, ye juice of a lemon, some morells & troafels that have been first soaked in water. Stew all till you think they are done, then toss them up with a lump of butter rolld in flower till ye sauce is pretty thick & sticks to ye meat. If you cant get morrels and troafels, dried mushroons will do. Put in some roasted chessnuts. If heifer veal, slice ye udder thin like coxcombs. You may lard them if you like it better then plain. Garnish with some slic’d lemon, fryed bacon and forsd balls.