Transform simple forcemeat into something amazing with this 18th century recipe for lumber pie.

Home-made forcemeat balls are layered in a dish with bone marrow, lemon peel,  asparagus tips and a selection of sweetmeats, and baked under a lid of puff pastry. Once cooked through, a rich warm sauce of egg yolks, butter, wine and sugar is poured into the pie.

18th century recipe for a hearty “lumber pye”, from The Cookbook of Unknown Ladies

Half roast a leg of veal. Take a pd & half of it clear the from skin, a pd & half of fresh marrow. Minse them very small. 3 large naple biskets, a pd of brown sugar, some pounded cloves & mace, 4 or 5 spoonfulls of rose water or orange flower water, 2 eggs broke in to it & work this into a paste with your hands. Make it into balls, then lay them in layers in your dish with a layer of whole marrow betwen a layer, a little shread lemon peel that has been boyled tender, & betwen another layer put the tops of asparagus, betwen another layer put all sorts of sweet meats & last of all put a layer of balls. Cover it with puff paste. When it is baked, pour a caudle made of a pint of white wine, the yolks of 4 eggs & a bit of butter. Sweeten it with sugar. Pour this hot & serve it up.

If you’re thinking of giving this dish a go and would like to see what you’re aiming for, there’s a fantastic photo on Ivan Day’s Historic Food website!

12 August, the ‘Glorious Twelfth’, when Victorian high society would leave London for moors, marshes and hills and the grouse-shooting season. It was the Game Act of 1831 that had introduced closed seasons, defined periods when the shooting of certain wildfowl species was strictly prohibited. The popularity of game within Georgian households had threatened the survival of many wild bird species in the British Isles, and government legislation was considered essential to protect economic interests in game bird populations.

The common snipe was not included in the 1831 Game Act. Perhaps their effective camouflage and erratic flight patterns helped to keep snipe populations buoyant for much longer than those of grouse, pheasants and partridges. Despite snipe being notoriously difficult to catch, our 18th century cookbook compilers clearly knew someone skilled in hunting these elusive animals, for here is a recipe for a ‘surfeit’ of them.

It’s a rich, meaty dish, perfectly suited for the onset of chilly autumnal evenings. So while the summer is still with us, maybe just make a mental note of it for a later month, when you have an appetite for something hearty and comforting. Indeed, snipes are considered at their best between December and January.

Recipe for a “surfuit” of snipes, from The Cookbook of Unknown Ladies

Take a fillit of veal. Cut it small with a pd of sewit, half a pd of good fat bacon, some thyme & pepper, a little shred lemon. Let these be minc’d extraordinary small, & made in forc’d meat wth an egg. Put a layer at ye bottom of yr dish & cut yr snipes in halves & lay a thin rashure of bacon on them, every one. After you have place’d ym handsomly in yr dish, strow a good deal of crumbs of bread & shred parsley & a very little pepper over all. Put some forc’d meat on ye edge of yr dish, & yr forc’d meat yt is left put as a lid over ym. Bake it an hour at least. When it coms out, cut a whole in ye top & pour in some very good greavy. So serve it up for first course.

It’s all but impossible to get hold of snipe at the supermarket, but a butcher with a specialism in game may be able to get hold of some for you. There are some handy tips on preparing snipe on the BBC Food website. Or why not consider adapting the recipe for quails, which are generally far easier to source…

You may feel a bit too squeamish to try this recipe for calf’s head hash. But for those brave enough to take up the challenge, the  reward is a stunning centrepiece.

Preparing a whole calf’s head is not for the squeamish…

If you saw the BBC documentary Calf’s Head and Coffee, you may well remember Stefan Gates preparing a stuffed calf’s head from a recipe of 1755.
The calf’s head hash recipe in our Cookbook of Unknown Ladies also dates from the Georgian period and should yield similar results.

It is a long recipe, and fairly difficult to unpick. Here is a basic outline of the method:

– First the calf’s head is cut in half. One side is covered in breadcrumbs and browned, while the other is sliced up as the ‘hash’.

– Next, beef is cooked on the stove to express its juices, made fragrant by the addition of pepper, allspice, winter savoury and onions. Butter is added to enrich the sauce, and when as much juice has been drawn from the meat as possible, it is strained and thickened.

– Oysters, anchovies, mushrooms, ketchup, a little mace and a touch of white wine are all stirred into the gravy. The sliced head hash is then boiled up in this surf-and-turf sauce, along with some bacon.

– Fresh forcemeat balls now need making up, and the calf brain boiled and then fried to make fritters.

– Finally, the presentation: the breaded half of the head is served with its garnish of fried brains, forcemeat, and lashings of gravy.

The calf’s head is used in this recipe – tongue, brains and all. It’s a fine example of how economical Georgian recipes could be while still making a spectacular showpiece of food. 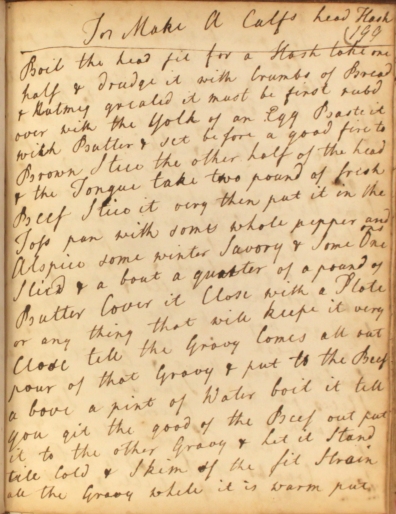 18th century recipe for a calf’s head hash. The head is breaded and garnished with brain fritters and forcemeat balls.

To Make a Calfs Head Hash

Boil the head fit for a hash. Take one half & drudge it with crumbs of bread & nutmeg greated. It must be first rubd over with the yolk of an egg. Baste it with butter & set before a good fire to brown. Slice the other half of the head & the tongue. Take two pound of fresh beef, slice it very thin, put it in the toss pan with some whole pepper and alspice, some winter savory & some onions slicd & a bout a quarter of a pound of butter. Cover it close with a plate or anything that will keepe it very close till the gravy comes all out. Pour of that gravy & put to the beef a bove a pint of water. Boil it till you git the good of the beef out. Put it to the other gravy & let it stand till cold & skim of the fit a gain. Strain all the gravy while it is warm. Put a bout a quarter of a pound of butter in the toss pan. Lit it boil in the pan till it leaves off boiling. Drudge it with flower & keep it stiring till it [is] brown but don’t make it to thick. Add all your gravy to it. Let it boil up. Let it stand & skim off the fat a gain. Put in a little pounded mace, some oysters, anchovys, mushroons, catchup & a little white wine. Put in your hash & some fryed bacon, give it a good boil & serve it up with forcd meat balls & the brains fryed.

You may make the forcd meat of any fresh meat. You must first parboil your meat & cut it in thin slices. Put to it some suet, some fat of bacon & some onion cut small. Season it with pepper, allspice & salt. Some crumbs of bread to it, then chop it as fine as possible. Mix it well to gether, taking out any strings. Wet it with a raw egg. Mix it well & role it into balls with a little flower. Fry them brown & keep them very hot. If you cant git suet, put same butter instead of it.

Boil the brains & beat them up. Put to thim an egg, a little creame, a little flower, some grated nutmeg & salt. Beat them well to geather & fry thim like fritters. Garnish the head with thim & the forcd meat. If the head is small, boil the sholder & slice some in the hash. It is best to make the forcd meate of it if you have it.