In our Cookbook of Unknown Ladies, the following recipe accompanies that for Mrs Hayne’s Dried Cream Cheese 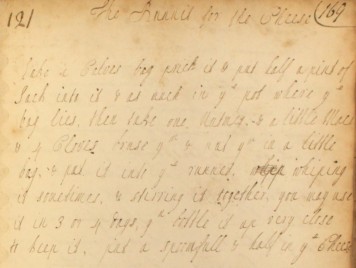 Eighteenth-century recipe for liquid rennet, from The Cookbook of Unknown Ladies

The Rennet for the Cheese

Take a calf’s bag, prick it and put half a pint of sack into it and as much in the pot where the bag lies. Then take one nutmeg and a little mace and 4 cloves, bruise them and put them in a little bag and put it into the rennet, whipping it sometimes and stirring it together. You may use it in 3 or 4 days. Then bottle it up very close to keep it. Put a spoonful and a  half in the cheese.

This recipe takes us through the preparation of liquid rennet, or ‘rennet wine’. The ‘calf’s bag’ refers to the animal’s fourth stomach compartment (the abomasum). The natural rennin produced in the stomach allows the calf to digest its mother’s milk and, when extracted, the enzyme can also be used to separate curds from whey in cheese-making.

Here, the stomach lining is soaked in a fortified wine (sack) for several days to create a liquid extract. Nutmeg, cloves and mace are also added to the mix. According to Richard Bradley’s The Country Housewife and Lady’s Director (1728), the addition of spices in this preparation would ‘strengthen’ the rennet, and lend cheese a certain sharpness or ‘briskness of taste’.